So, from my last post with the Intrepid, I shot some ISO 100 black and white film using the typical double sided 4×5 film holders. This was a great deal of fun and my film is off being developed. Yay!

In the meantime, I had received my orders for some instant film.

I had looked around for what types of instant films were still available. Turns out, there aren’t that many… which is a shame. 🙁 The current crop of consumer “instant” photo film are these little squares… -_-; Very sad.

After digging around,  I found that I could buy recently made FujiFilm FP-100C instant film. This film was not the full 4×5 size, but a smaller 3.25×4.25 size. Not a deal breaker, but definitely not “large format”. Still, this is a function of the film, the surrounding chemical pack, and the film holder.

Film Back Required For Film

In order to actually shoot with this film, I needed a film back that could hold the cartridges and properly put them through the wringer or roller, as the case may be. There were two sizes of the FP-100/FP-3000C

I managed to fit two boxes of the FujiFilm, one each of the FP-100C and the FP-3000B. The Intrepid 4×5″ Large Format camera sits nicely in there. The FujiFilm PA-145 film back. In a side pocket, I have a blackout cover sheet for doing the composition and focusing. Not in the frame is a side back that attaches to the main back, which holds the lens. On the opposite side, the lens release cable.

I’m looking forward to doing some shooting with this combo. Now, the interesting thing is, I need to make a composition mask for the matte focusing screen… because the instant film negative is smaller than the actual 4×5, if I compose a shot based on what I see through the ground glass, part of the image will be cutoff. 🙁 As was the case for the first shot I took. -_-;

In all, I made three “quick” exposures with the FP-3000B and my first thought was: my that was a PITA to get a shot, but once I got over that, I found that while I can’t appreciate all the aspects of the format and medium, the physical act of shooting, pulling the film out, waiting, then peeling apart the film and backing to see the image… it was a bit of a “wow” moment. And the captured image, even though it’s blurry and fuzzy due to bad focusing and settings, has a nice artsy feel to it.

I suppose by the time I get to the bottom of my stock of film, I will have developed a better fondness for this medium… more on that in future posts. 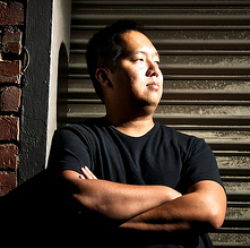